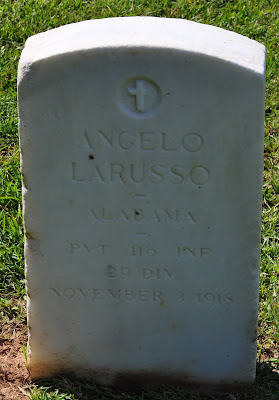 PVT Angelo LaRusso was born about 1872 in Bisacuiguino, Italy. He was a son of James and Theresa (Tortorice) LaRusso.  Angelo immigrated with his family in 1898 and the family lived in Jefferson County, Alabama where his father supported the family as a truck farmer growing vegetables for local sale. Angelo worked as a coal miner, his last residence being in Bessemer, Alabama.

After being drafted on 10 Apr 1918, Angelo was assigned to D Company 116th Infantry and he would train with the unit and embark with them aboard the USS Finland on 15 Jun 1918 when the unit was sent to France.

PVT LaRusso was wounded during the fighting in late October 1918 and died of his wound(s) on 3 Nov 1918.

PVT LaRusso was repatriated and re-interred in the Cedar Hill Cemetery in Bessemer, Alabama.
Posted by Hobie at 1:03 PM