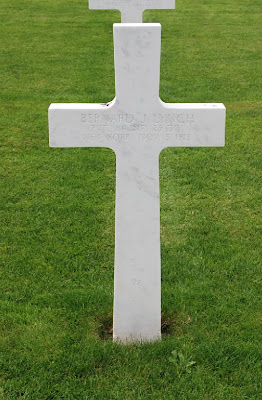 PVT Bernard J. Lynch was born 30 Aug 1891 in New York, New York.  He was the 2nd of 7 children born to Charles Joseph and Mary A. (O'Neill) Lynch.  His parents were natives of Ireland his father having been born in Balbriggin. His father worked as a driver for a grocery.  By 1910, Bernard was working for an undertaker. In 1917, Bernard was working as a gateman for the Hudson Navigation Company.

Bernard was inducted on 2 May 1918. He was immediately sent to the 6th Recruit Company at Camp McClellan, Alabama.  On 22 May 1918 he was reassigned to Machine Gun Company 116th Infantry.  It was with that unit that he boarded the USS Finland at Hoboken, New Jersey and departed for France on 15 Jun 1918.  The ship arrived at the port of Saint Nazaire, France on 28 Jun 1918. The entire 29th Division went through trench warfare training and was then put into a "quiet" sector on the front lines to acclimatize. On 8 Oct 1918 the regiment pushed off as part of a major offensive in the vicinity of Verdun.  Sometime in this combat, PVT Lynch was wounded.  He died of his wound(s) on 5 Nov 1918.

PVT Lynch rests forever in the Meuse-Argonne American Cemetery.
Posted by Hobie at 7:29 AM