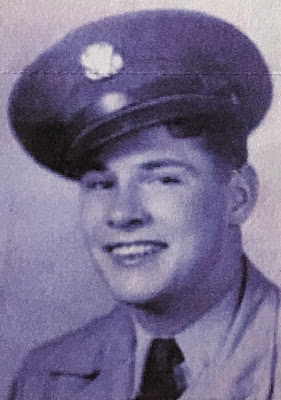 PFC Huntington Peyton Paul was born 18 Aug 1921 in Rockingham County, Virginia. He was the 2nd son of John Gray and Elizabeth Huntington (Gibb) Paul. Both parents were sales people for various companies. In 1930 his father divorced Elizabeth who had moved to Washington, D.C. and married Jessie Wood Bouldin. The family lived in Roanoke, Virginia.

Huntington likely enlisted in the Roanoke unit of the National Guard for the $1 he was paid for each day of drill at the local armory. When the unit was federalized in February 1941 he was working as an actor. PVT Paul then trained with the unit at Fort Meade, Maryland, in the Carolinas for the maneuvers and at Camp Blanding, Florida before shipping out on the Queen Mary in September 1942. At some point he was transferred to L Company 116th Infantry. Once in England the unit trained for the amphibious landing at Omaha Beach. PFC Paul took part in the landing but he reportedly stepped on a land mine when attacking a machine gun position outside of Saint-Lo and was killed in action on 30 Jun 1944.

His father served as a CPT in 6th Tench Mortar Battalion, 6th Division in France in WW1 and as a LTC in the Chemical Corps in WW2. His maternal uncle, John Willard Gibb, served as a PVT in C Company 2nd Virginia Infantry during the Mexican Punitive Expedition. Great-grandfather, Robert Asher Gray served as a PVT in B Company 9th Virginia Cavalry (Johnson's).
Posted by Hobie at 8:02 AM