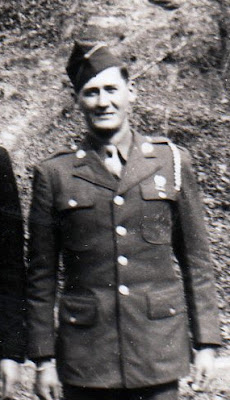 PVT Darwin Leo Snipes was born 16 Dec 1922 in Bonanza, Kentucky. He was the youngest of 6 children of Joseph Jeremiah and Cora (Spradlin) Snipes. His parent's families had been in the area for generations. His father farmed and of course everyone helped as age permitted. Darwin's formal education ended with grammar school and he went to work for A. B. Ewing in Prestonburg in a coal mine.

Darwin was drafted in March 1943. Before heading overseas to the European theater in May 1944 he would have undergone his basic military training and was likely assigned to a training unit. We know that he had a furlough just before shipping out. He was transferred from the 92nd replacement depot to K Company 116th Infantry on 19 Jun 1944. PVT Snipes was struck in the back by mortar or artillery shell fragments and killed in action just 10-days later, on 29 Jun 1944 near Saint-André-de-l'Épine just north-east of Saint-Lo, France.

PVT Snipes was repatriated and re-interred in Snipes Family Cemetery #2 in Prestonburg, Kentucky.