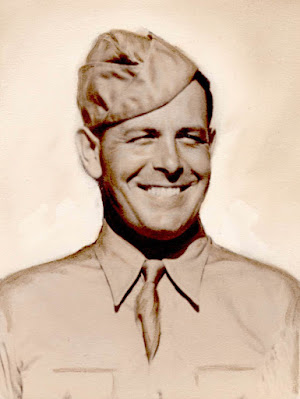 1LT Frederick Emerson Ulrey was born 15 Nov 1912 in North Manchester, Indiana. He was the oldest of the 2 children born to Alvin L. and Lucy Emma (Howenstine) Ulrey. His father was vice president of a local bank and owned a home valued at $10,000 at 509 East Third Street in North Manchester. Frederick was able to complete high school, graduate from college and even begin work on his masters degree. His mother died in 1935 and his father passed the following year. Frederick married Kathryn Lucille Zollers less than a month after his father's death. The couple moved to Oklahoma City, Oklahoma where Frederick taught at Harding Junior High and North East High School reportedly earning $1400 in 1939. They lived at 325 West 24th Street which they rented for $40 a month. He also acted as scout master for a troop formed at the school. They then moved back to Indiana living in Wasbash where Frederick went to work for the city school system.

Frederick was drafted in February 1942. He was immediately identified as "officer material" and sent to officer candidate training. We do not know of his previous assignments but he was already a 1LT when transferred from the replacement depot to Headquarters and Headquarters Company 3rd Battalion 116th Infantry as Company Commander on 28 Jun 1944. He was not long in his assignment as he was killed in action on 8 Jul 1944 while the regiment fought to liberate Saint-Lo, France.

1LT Ulrey was repatriated in 1948 and re-interred in Arlington National Cemetery in Arlington, Virginia.

Frederick and Kathryn had no children. Kathryn never re-married.