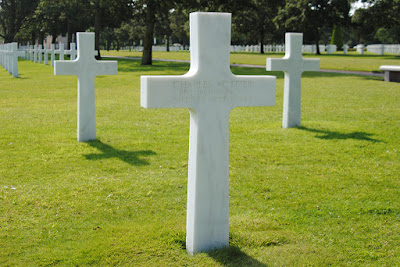 PFC Charles W. Fizer was born 6 Jan 1922 in Bedford, Virginia to Charles Henry and Mary Pauline (Burton) Fizer.  His father worked as a lithographer in a printing plant.

Charles was a PFC serving in the National Guard when his unit, A Company 116th Infantry, was federalized in 1941. He continued to serve with that unit as it underwent training and on D-Day, 6 Jun 1944, which he survived.  He was killed in action on 11 Jul 1944.

PFC Fizer is often overlooked as one of the "Bedford Boys" because he was not one of those KIA on D-Day but he is one of the many lost from this small community.  He rests with many of his brothers in arms in the Normandy American Cemetery.
Posted by Hobie at 4:18 PM

Email ThisBlogThis!Share to TwitterShare to FacebookShare to Pinterest
Labels: A Company, BedfordBoys, NormandyAmericanCemetery