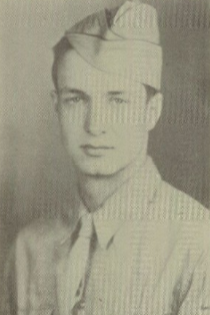 PVT Warren Erdice Shaffer Jr was born 24 Dec 1924 in Akron, Ohio. He was the 2nd of the 6 children born to Warren Erdice and Jennie Maude (Riley) Shaffer. His father worked as an auto mechanic and bought a home at 415 Wirth Street in Akron in which members of the family lived for many decades. Young Warren graduated from high school and became an apprentice machinist.

Warren was drafted in March 1943. After his basic training he was sent to the European theater and was transferred from the replacement depot to A Company 116th Infantry on 7 Jul 1944. PVT Shaffer was killed in action on 11 Jul 1944.

PVT Shaffer was repatriated and re-interred in Hillside Memorial Park in Akron, Ohio.

2x great-grandfather, John Cotter Hart, served in several cavalry units and fought at Chippewa, Lundy's Lane, and burning of Buffalo in the War of 1812. He later raised a regiment of cavalry of which he was made COL. Warren's father served as a PVT in K Company 126th Infantry in France during WWI.
Posted by Hobie at 6:44 AM