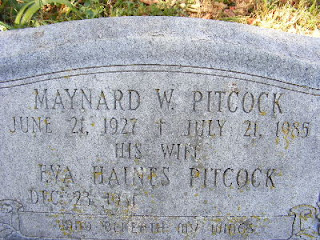 SSG Maynard William Pitcock was born 21 Jun 1927 in Opequon, Virginia.  He was the youngest of 11 children of Moses Luther and Sarah Edna (Avery) Pitcock. His father died of cancer in 1928 when Maynard was only 10 months old and it was left to 2 of Maynard's older brothers to support the family by farming.

Maynard entered the Army in February 1946 and served a little more than a year before his discharge.  He married Eva Naomi Haines on 23 Dec 1947 and they would have 3 sons. Maynard enlisted in the National Guard and served with Headquarters and Headquarters Company 3rd Battalion 116th Infantry in Winchester, Virginia.  At age 58 he was no doubt looking forward to retirement and collecting his retirement pay just 2 years later.  As the 116th Infantry Brigade (Separate) units were being reorganized into the 1st Brigade, 29th Infantry Division (Light) in 1985 an attempt was made to verify the physical fitness and deployability of soldiers in the Brigade. SSG Pitcock underwent a "stress test" after initial screening indicated that he might be susceptible to heart disease. After the test he suffered a heart attack and died.

Email ThisBlogThis!Share to TwitterShare to FacebookShare to Pinterest
Labels: HHC-3/116