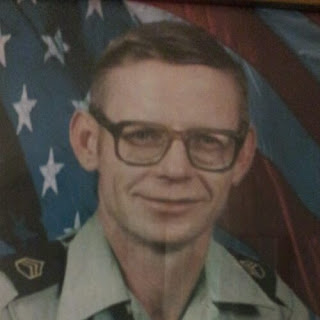 SSG Larry Henry Comer was born 11 Mar 1946 in Shenandoah, Virginia. He was the son of Wilbur Warren and Treva Oneta (Morris) Comer. Larry operated the Waynesboro Small Engine Repair Company in Waynesboro, Virginia and attended the Pentacostal HolinessChurch. Larry was married to Cherie Jacqueline Bashlor with whom he had 3 daughters.

Larry enlisted in the Army on 22 Sep 1967 and served a tour in Vietnam and 2 tours in Germany as well as at Fort Belvoir, Virginia before enlisting in the National Guard in 1981 as a SSG. He was driving an M880 on a rainy, oil-slicked road when he was involved in a two vehicle accident and was killed.

SSG Comer was interred in Oaklawn Cemetery in Staunton, Virginia.
Posted by Hobie at 5:00 PM

Email ThisBlogThis!Share to TwitterShare to FacebookShare to Pinterest
Labels: HHC1stBde29ID(L)