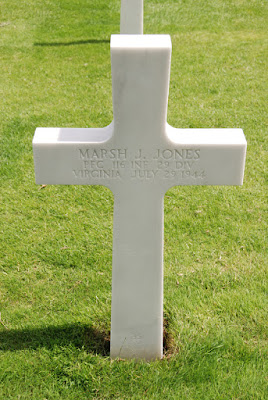 PFC Marsh Julian Jones was born as "Morse Julian Jones" on 17 Aug 1913 in Rainswood, Virginia to Eppa George and Anna Mirteen (Allison) Jones.  The family of 6 farmed in Richmond County.

Marsh was drafted in April 1941.  At some point after his initial training, Marsh was assigned to Anti-Tank Company 116th Infantry.  He trained with that unit in England for the amphibious assault on "fortress Europe" and was with the unit on 6 Jun 1944.  Marsh fought with the unti until 29 Jul 1944 when he was killed in action.

PFC Jones is buried in the Normandy American Cemetery.  His father died 1 Oct 1944. His brother, George Wesley Jones served in the Army during the war.

Email ThisBlogThis!Share to TwitterShare to FacebookShare to Pinterest
Labels: AT Company