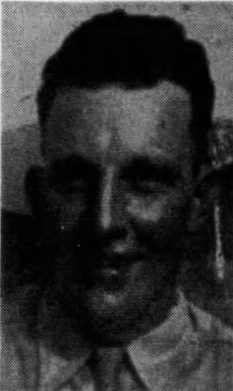 PFC Benjamin Edwin Smith was born 6 Sep 1919 in Paterson, New Jersey. He was the 4th of 5 children born to Arthur Cleveland and Julia Akers (Green) Smith. His father drove trucks for various companies. Benjamin married Averil Cecelia Daniel in June 1938 and the couple had their first son in November 1938 and their second in July 1942. Benjamin worked for Woolworth Company as a shipping clerk and then for Wright Aero.

Benjamin was drafted in June 1944, completed his basic military training and was then sent to the European theater in September 1944. However he was apparently not sent to a combat unit until he was transferred from the replacement depot to G Company 116th Infantry on 15 Dec 1944. PVT Smith was promoted to PFC on 2 Feb 1945. He was killed in action on 1 Mar 1945 near Mönchengladbach, Germany.

His brother, Albert Edward Smith also served in the U.S. Army in the European theater.
Posted by Hobie at 5:30 PM