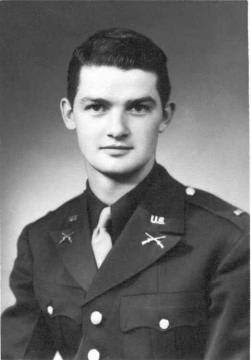 Cornelius Ayer Sabin was born November 9, 1916 in Orangeburg, South Carolina. One of seven children, he grew up in Walterboro, South Carolina and Jonesboro, Tennessee. He earned his Bachelor of Science Degree in Social Science from State Teacher's College (East Tennessee State) in Johnson City, Tennessee, and completed post graduate work at Northwestern University, Evanston, Illinois . He received his PhD at Stanford University.

Jonesboro, Tennessee newspaper article about four of the Sabin brothers in the service.

Neil Sabin was attached to the U. S. Army 116th Infantry Regiment, 29th Division, E.T.O., and was critically wounded in Normandy, France on July 11, 1944. He received the Purple Heart and Bronze Cross. He spent almost four years in hospitals, and had thirteen operations. He was promoted to the rank of Captain, and separated from active duty at Madigan General Hospital, Tacoma, Washington, November 26, 1947.

On August 6, 1945 in Oak Ridge, Tennessee, he married Juanita Dorothy Bean, a WAVE from Tacoma, Washington. They settled in Portland, Oregon, where for over thirty years Dr. Neil Sabin was a well respected professor at Lewis and Clark College. They had two daughters. After a prolonged illness, Nita Sabin died in 1994.

You can read more about Dr. Sabin at http://www.oldplaces.org/neilsabin/neil.html