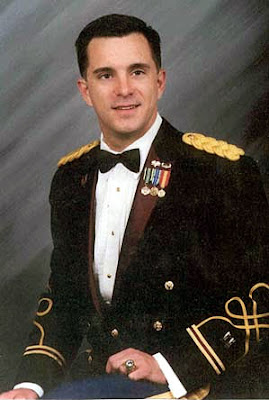 John was attending Virginia Military Institute when he enlisted in Company A (- Detachment 1), 3rd Battalion, 116th Infantry, 29th Infantry Division (Light). When he became eligible he transferred to the Simultaneous Membership Program (for soldiers in both the ROTC and National Guard) and was promoted to the pay-grade of E-5. Cadet Teal made every effort to be involved in unit activities and even designed a "T"-shirt for the unit which styled itself as the "Legion of Doom".  Such was the popularity that the shirt was re-issued when the unit was re-designated as Company B, 1st Battalion, 116th Brigade Combat Team. When John graduated and received his commission as a 2LT he attended training at Fort Sam Houston.

CPT Teal was assigned to 2nd Brigade, 4th Infantry Division on 23 Oct 2003 when he was killed by an improvised explosive device initiated as his vehicle passed. He was posthumously awarded the Bronze Star. CPT Teal is buried in Arlington National Cemetery.


The Army Medical Command established the John R. Teal award following the first combat loss of a medical officer supporting Operation Iraqi Freedom. This award annually recognizes one medical operations or support officer and NCO who have made significant contributions to the medical community and displayed exceptional soldiering.

Email ThisBlogThis!Share to TwitterShare to FacebookShare to Pinterest
Labels: A-3/116, ArlingtonNC, BronzeStar