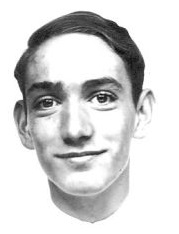 PFC Charles William Starina Jr. was born 23 Mar 1924 in Hawkesville, Oklahoma. He was the 4th of 5 children born to Charles William and Iva Blanche (Overstreet) Starina. His parent's first born, a daughter, had died in infancy. Charles' father was a farmer in Garden, Kansas growing vegetables for market in nearby Joplin, Missouri. The family home was valued at $200 in 1940.  At age 18, young Charles was working in the Joplin Stockyards.

Charles was drafted just 2 days before his 19th birthday in March 1943. After completing his basic military training he was sent to England in May 1944. He wasn't with the regiment for the D-Day landings but transferred from the replacement depot to B Company 116th Infantry on 5 Jul 1944. PVT Starina was wounded on 12 Jul 1944 near Saint-Lo, France and evacuated to hospital. After recovery he was sent to the replacement depot and returned to the unit on 12 Aug 1944. He was wounded again in the fighting for Brest on 2 Sep 1944 and again evacuated to hospital. This must have been a relatively inconsequential wound because he returned to the unit again via the replacement depot on 7 Sep 1944. He didn't stay with the unit for long as PVT Starina was injured on 17 Sep 1944 and again evacuated. This must have been more serious because he didn't return to the unit again until 3 Dec 1944. He was promoted to PFC on 11 Dec 1944. PFC Starina was killed in action near Julich, Germany on 25 Feb 1945.

Charles' father served as a PVT in A Company 314th Engineers, 89th Division in France during WWI. Maternal great-grandfather, William R. Overstreet, served in Missouri unit of the Confederate States Army during the Civil War.

Email ThisBlogThis!Share to TwitterShare to FacebookShare to Pinterest
Labels: B Company, NetherlandsAmericanCemetery