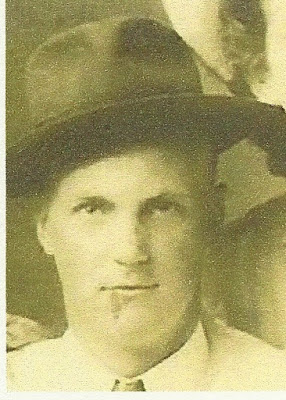 PFC Vernon Earl Simpson was born 1 Jul 1920 in Cherry Hill, Arkansas. He was the first born of 5 children born to Earl Franklin and Beulah C. (Risenhoover) Simpson. His father farmed in Smith Township, Arkansas and Vernon worked with his father, that being his recorded employment in 1940. Vernon had never progressed beyond grammar school. Vernon married Lillian Carrie Hurst on 20 Jan 1942.

Vernon didn't register for the draft until February 1942 and by that time he was working for Dupont making gun powders for ammunition for the war effort. He was drafted in December 1943. After his basic military training he was sent to the European theater in mid-August 1944. PVT Simpson was transferred from the replacement depot to B Company 116th Infantry on 9 Sep 1944. He fought with the unit at Brest and was promoted to PFC on 20 Sep 1944. He continued to serve with B Company as a rifleman and was a non-battle casualty, injured badly enough that he had to be evacuated to a field hospital. PFC Simpson didn't return to the unit until 25 Nov 1944 and participated in the fighting at Koslar, Germany as well as the clearing of the west bank of the Roer River. PFC Simpson was killed in action after the regiment crossed the Roer near Immerath, Germany.

PFC Simpson was repatriated in 1949 and re-interred in the Fort Smith National Cemetery in Fort Smith, Arkansas.

Email ThisBlogThis!Share to TwitterShare to FacebookShare to Pinterest
Labels: B Company, FortSmithNC