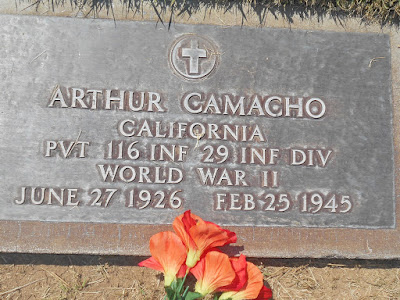 PVT Arthur Camacho was born 27 Jun 1926In Los Angeles County, California to Jesse and Lola (Cabrera) Camacho.  Arthur's father died sometime between 1934 and 1940 and the family moved to Washington, California.  His mother was born in Mexico.  In 1940 Arthur together with his mother and 3 siblings lived with his maternal grandmother and an uncle.  His uncle cut barkfr the WPA and his mother worked in a cannery. The reported family income for 1939 was  $521.

Arthur was likely drafted sometime in 1944 and was sent overseas as a rifleman.  On 15 Feb 1945 he was transferred from the replacement depot to E Company 116th Infantry.  He was killed in action 10 days later on 25 Feb 1945.

PVT Camacho was repatriated in 1948.  At the time his mother lived at 405 2nd Street in Broderick, California.  PVT Arthur Camacho was buried in Saint Marys Catholic Cemetery in Sacramento, California.
Posted by Hobie at 5:35 AM