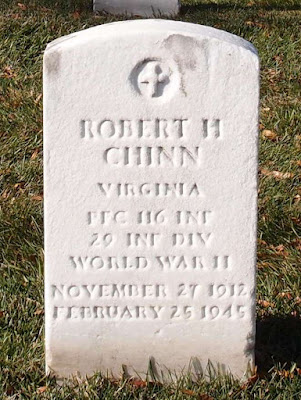 PFC Robert Harry Chinn was born 27 Nov 1912 in King George County, Virginia to Henry Marshall and Mary Elizabeth (Bryan) Chinn.  His father farmed and operated a store. On 8 Mar 1939 he married Lucille Shirley Hart. In 1940, Robert was working with his father in that store.

Lucille did not remarry until 1951.  So far as we know they had no children together.
Posted by Hobie at 4:57 AM

Email ThisBlogThis!Share to TwitterShare to FacebookShare to Pinterest
Labels: ArlingtonNC, B Company, HQCo3rdBn