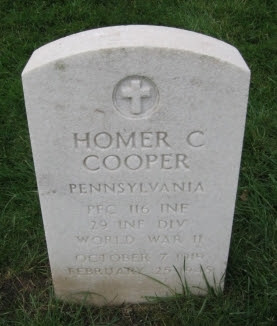 PFC Homer C Cooper was born 7 Oct 1919 in Johnstown, Pennsylvania to William Joseph and Esther (Bennett) Cooper.  William was variously a baker, an inspector in a steel mill and crane operator.

PFC Cooper was returned to the U.S. and buried in Grafton National Cemetery in Grafton, West Virginia.  This was likely chosen because it was close to the family and they wouldn't have to purchase a plot in the national cemetery.
Posted by Hobie at 6:40 AM