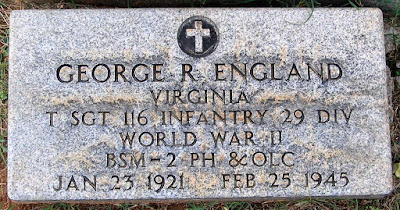 TSGT George Robert England was born 23 Jan 1921 in Cartersville, Virginia to James Nicholas and Minnie Caroline (Deidrich) England. His father was a lawyer who was injured in an automobile collision with a truck and died in 1929.  His mother was a public school teacher and older brother James was an electrician.

George was living in Sussex and a SGT in the National Guard when he was mobilized in Jun 1941.  He was already a TSGT assigned to F Company 116th Infantry on 6 Jun 1944 for the D-Day landings where he was wounded.  He went to hospital and returned to the unit via the replacement depot on 25 Jul 1944.  On 7 Aug 1944, near Vire, he was wounded again and again went to hospital.  He returned to the unit again via the replacement depot on 21 Dec 1944.  On 14 Jan 1945 he was transferred to B Company 116th Infantry and was killed in action 11 days later on 25 Feb 1945.  TSGT England was twice awarded the Bronze Star medal.