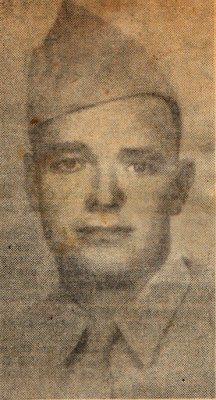 PFC Ralph Wayne Reed was born 7 May 1910 in Fulton, Indiana. He was the oldest and only son of the 2 children born to William Benjamin and Flora Edna (McAlister) Reed. His father farmed and worked as a blacksmith in a coal mine. Ralph was farming when he married Clara Inez Maris in January 1931. The couple had twins in 1936 who were unfortunately premature and died the day they were born. They had a son the following year.

Ralph was drafted in April 1944. After his basic military training he was sent to the European theater. PVT Reed was transferred from the replacement depot to C Company 116th Infantry on 28 Oct 1944. He suffered a non-battle injury on 5 Dec 1944 and was evacuated to hospital. He returned to the unit via the replacement depot on 16 Dec 1944. He was again injured on 25 Dec 1944 and again evacuated. He returned to duty on 1 Jan 1945. Ralph was promoted to PFC on 12 Jan 1945. PFC Reed was killed in action on 25 Feb 1945.

PFC Reed was repatriated in 1949 and re-interred in the Tangier Cemetery in Tangier, Indiana.