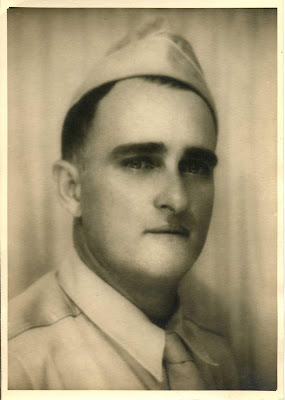 SSG Henry Neal was born 15 Jul 1911 in Hico, Texas. He was the oldest of 4 children and only surviving son born to William Richard and Nora Elizabeth (Brown) Neal. A younger brother was born 6 Sep 1925 and died the same day. His father farmed in Hamilton County, Texas. Henry married Anna Lou Gibson in February 1933. Unfortunately they would divorce. Henry remarried about 1939 to Opal Elafair Ricketson. In 1940 he was working for the Lower Colorado River Authority in Travis County, Texas and reported a 1939 income of $680 with which he was also supporting his mother. They paid a monthly rent of $8 for their residence.

After Henry was drafted and completed his basic training he was assigned to G Company 116th Infantry and was with the unit at Aachen, Germany. PVT Neal was wounded on 14 Oct 1944 and evacuated to hospital. He had returned to the unit and was promoted to SGT on 1 Nov 1944. Henry was promoted to SSG on 14 Dec 1944. He was still with the unit when he was killed in action on 25 Feb 1945.

Henry had no children. Opal remarried in June 1945. Grandfather, Benjamin Franklin Brown, served as a PVT in  B Company, 8th Battalion Georgia Infantry (CSA) in the Civil War.
Posted by Hobie at 10:08 AM