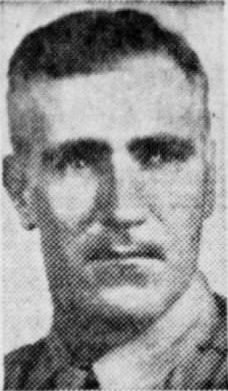 T5 Byron O'Bannon Saunders was born 21 Jan 1905 in Louisville, Kentucky. He was the youngest of the 2 children born to James H. and Gertrude Lillian (Minter) Saunders. His father was a clerk for R. G. Dun and Company (now Dun and Bradstreet) but died of tuberculosis in April 1906. The family then went to live with his paternal grandfather and Gertrude supported the family as a stenographer for an insurance firm. She died in September 1913, also of tuberculosis. The orphans were separated. Byron's sister, Elizabeth, was sent to the Presbyterian Orphans' Home in Louisville and Byron to their cousin, Susan Hawes' farm in Penn, Kansas where he likely helped work the farm for her and her sister. He had not been able to get more than a grammar school education. However, he left the farm at some point and moved back to Louisville. It was probably in looking for work that Byron enlisted in the Navy and held the rank of S1c while serving aboard the USS Wyoming from sometime in 1924/25 to 7 Oct 1927. Looking for work at sea, he applied for a Seaman's Protection Certificate in November 1927 but it is unknown if he actually went to sea as a merchant seaman. In 1940 Byron was living with his sister and her husband in Louisville and working as a machine operator for Louisville Paper Company earning a reported 1939 income of $720. The beginning of the war likely provided the opportunity and he went to work at the Naval Ordnance Station in Louisville.

By the time he was drafted in December 1942 he felt able to tell authorities that he had completed 2 years of high school. Byron was sent to the U. S. Army Air Corps where he served until he was transferred from the 9th Air Force Service Command to G Company 116th Infantry on 12 Jan 1945. At that time he held the rank of T5, equivalent of a CPL, but was assigned as a rifleman. T5 Saunders fought with his unit until killed in action near Hochneukirch, Germany on 27 Feb 1945.

T5 Saunders was repatriated in 1949 and re-interred to rest forever with other family members in the Cave Hill Cemetery in Louisville, Kentucky.