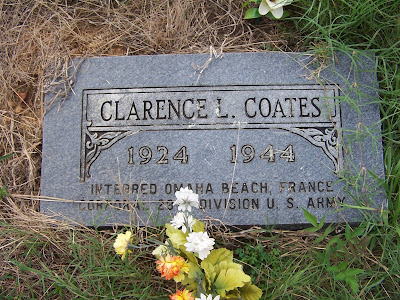 CPL Clarence Lamar Coates was born in 1924 in Casa, Arkansas to Jerry Anderson and Ada (Tanner) Coates.  Jerry supported the family by farming.

We don't know when Clarence began his military service.  The morning report is a bit unclear on when or to which unit he was assigned but he may have been assigned first to B Company 116th Infantry and then D Company.  This occurred on 10 and 13 Jun 1944.  CPL Coates was killed in action on 20 Jun 1944.

CPL Coates is buried in the Normandy American Cemetery and has a cenotaph in Casa Cemetery in Casa, Arkansas.
Posted by Hobie at 11:24 AM