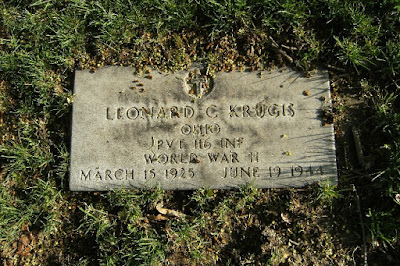 Leonard was drafted in August 1943.  He might have been assigned to A Company 46th Infantry before he was shipped overseas. Sent to England, Leonard was assigned to F Company 116th Infantry.  He might not have had much time to train with the unit for the amphibious assault that took place on 6 Jun 1944 but he survived that and fought on with the unit until killed in action on 19 Jun 1944 (D+13).

PVT Krugis was repatriated in 1948 and is buried Calvary Cemetery in Cleveland, Ohio.  Leonard's older brother, Alfred, served in the Marine Corps during the war.
Posted by Hobie at 7:29 PM