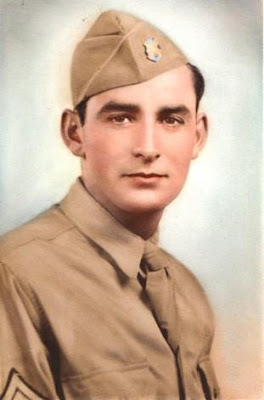 SSG Elijah Webster Martin was born 3 Jun 1916 in Clover, Virginia.  He was the youngest of 12 children born to John David and Mary Elmira (Tatum) Martin. The family farmed. In 1940 Elijah was living in Norfolk and working as a salesman for A&P Tea Company. He reported a 1939 income of $560.

PVT Martin entered into federal duty with his National Guard unit, F Company 116th Infantry, on 3 Feb 1941. He was with the unit when it trained at Camp Meade, Maryland and Camp Blanding, Florida before shipping out for England in September 1942. He continued to train with the unit as it prepared for the amphibious assault on occupied France.  It was in that time period that he must have demonstrated competence and leadership ability that resulted in his promotion to SSG. He was with the unit in the landing on 6 Jun 1944 and fought with the unit until he was killed in action on 19 Jun 1944. SSG Martin was posthumously awarded the Bronze Star. On 6 Jun 1944 he secured cover for disorganized men and helped to organize them into a fighting unit under heavy enemy fire.

SSG Martin was repatriated in 1948 and re-interred in the family cemetery in Clover, Virginia.