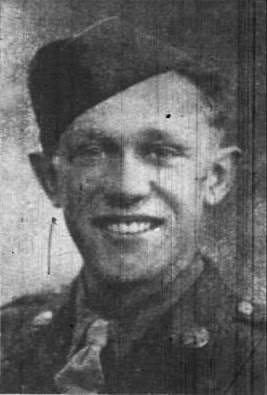 PFC John Anthony Sobecki was born 24 Dec 1920 in South Bend, Indiana. He was the 3rd of the 8 children born to Valentine John and Martha B (Langner) Sobecki. His father was a native of Poland and his mother's parents were as well. John was raised in the large Polish Catholic community in South Bend. His father drove a truck for the Singer Sewing Machine Company and later inside the factory as a wood cutter among other things. By 1940 the family owned their home, valued at $3000, at 2629 West Grace Street in South Bend.

John attended Saint Adalbert's Catholic School and graduated from Washington High School where he played half-back on the football team and guard on the basketball team. John would go to work for the Oliver Farm Equipment Company but he reported a 1939 income of only $18. He was still living at home.

John was drafted in November 1942 and attended training at Camp Wheeler, Georgia and Camp Shenango, Pennsylvania. He shipped out for the European theater arriving in England on 6 Jun 1943. Assigned to F Company 116th Infantry, he trained with the regiment for the amphibious assault that was planned to be a part of the liberation of Nazi occupied France. He took part in the landing but went missing. His body was located and the company reported that he had been killed in action on 6 Jun 1944 but the official date was changed to 9 Jun 1944.

PFC Sobecki was repatriated in 1943 and re-interred in the Saint Joseph Cemetery in South Bend, Indiana.
Posted by Hobie at 4:16 AM