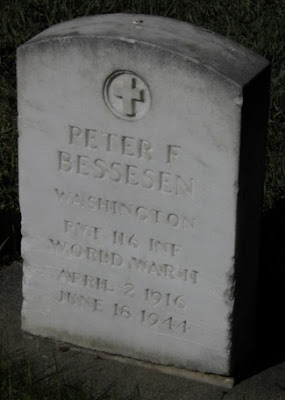 PVT Peter Franklin Bessesen Jr. was born 2 Apr 1916 to Peter Franklin and Maude Mayotto (Calkins) Bessesen of Yakima County, Washington.  His parents operated a boarding house in 1920 but by 1930 his father was supporting the family working as a carpenter.  Peter Senior's parents were Norwegian immigrants. Only 2 other of Peter Jr's 5 siblings lived to adulthood and his mother died in 1928 when he was 12 years old.  His father re-married soon after.

Peter entered the service in October 1943, went overseas in April 1944 and was assigned to A Company 116th Infantry on 13 Jun 1944 just 7 days after the unit was decimated in the D-Day landing.  PVT Bessesen was wounded and died of those wounds on 19 Jun 1944 according to the morning report but other records indicate that he died on 16 Jun 1944.

PVT Bessesen is buried in the Tahoma Cemetery in Yakima, Washington.

Both of Peter's surviving, younger, brothers served in the Army during the war. Brother Junior Orville Bessesen was a TSGT in the Army Air Corps and was awarded the Air Medal 4 times.