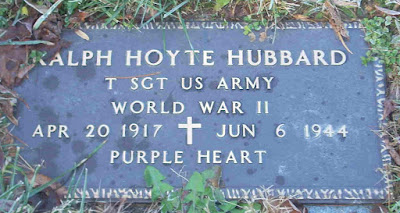 TSGT Ralph Hoyte Hubbard was born 20 Apr 1917 in Wise County, Virginia the only surviving child of Henry Floyd and Martha Lucinda (Bolling) Hubbard.  He was likely a 3rd or 4th cousin to Ezra Hubbard. The family farmed. In 1940 his father was working for the state highway department and Ralph was working as a salesman.  Ralph had a reported 1939 income of $210.

Ralph had completed 2-years of college and was working as a salesman when he was drafted in May 1941.  After his initial training he was sent to England perhaps having already been assigned to C Company 116th Infantry.  He was with that unit on D-Day as the unit was one of the companies of the 116th Infantry making the amphibious assault on Hitler's "fortress Europe".  TSGT Hubbard died that day, killed in action on 6 Jun 1944.

Repatriated after the war, TSGT Hubbard was buried in the Banner Bolling Cemetery in Pound, Virginia.
Posted by Hobie at 4:16 AM