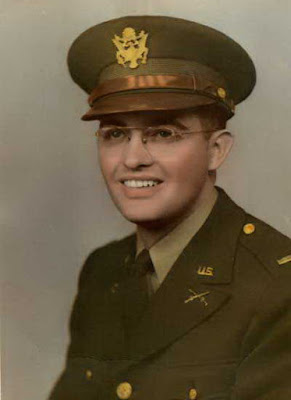 Thanks to Dana Spencer for this posted to his FindAGrave memorial:

LaVerne Almund Bateman, son of Julius and the late Marie Poulter Bateman, was born June 2, 1915 in Byron, New York. In South Byron he was a Scout, and a member of the Methodist Church and orchestra, and of the High School baseball and basketball teams and orchestra. 1937 he was graduated from the Rochester Business Institute in Batavia. He was employed five years as salesman for Granger & Company, Batavia. June 2, 1940 LaVerne married Lucile Munsie. They had one child, Richard L. Bateman.

June 25, 1942, LaVerne entered the Army at Ft. Niagara. Service No. 01 315 660. He was graduated from Officer Candidate School, Ft. Benning, Georgia, second highest in class of 200. He was then attached to the 66th Division at Camp Blanding, Florida, and Camp Robinson, Arkansas.