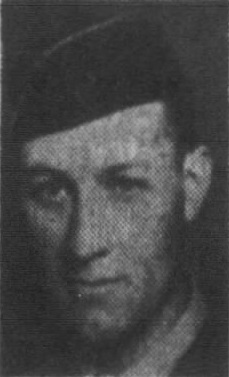 PFC Daniel Brunke Schmidt was born 1 Oct 1913 in Cherry County, Nebraska. He was the eldest of the 5 children born to Harmon Brunke "Harm" and Mary Ellen (Osgood) Schmidt. 5-year old sister Elizabeth died in 1921. His father was a rancher who died unexpectedly in 1922 when one of his horses kicked him in the head. His mother married a man who had been their hired hand, Fred Mittendorf, who was a native of Germany. Mary and Fred had 2 more children and continued to live on the ranch. In 1940 Daniel was working for Lewis Anderson as a ranch hand. His family moved from the Cherry county ranch to Ulysses, Nebraska in 1942. He then went to work as a contractor and carpenter at the Alliance Army Air Base.

Daniel was drafted in November 1942. 3 months after entering the service he was sent to England and assigned to F Company 116th Infantry. He trained with the unit for the planned amphibious landing that was to be a part of the effort to liberate Nazi occupied Europe. PFC Schmidt was killed in action on 6 Jun 1944.

PFC Schmidt was repatriated in 1948 and re-interred in the Sterling Cemetery in Sterling Nebraska.

Daniel's brother-in-law, LT(jg) Cecil Leroy Smith, and half-brother, PFC Fred Mittendorf Jr., were both serving at the time of Daniel's death.
Posted by Hobie at 1:21 AM