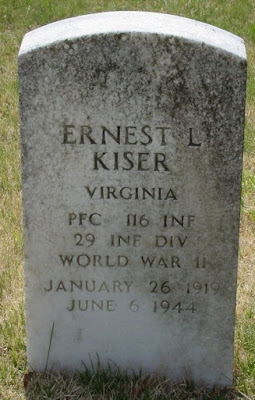 PFC Ernest Lincoln Kiser was born 26 Jan 1919 in Wise County, Virginia to Orbin Arthur and Pheba Ellen (Yates) Kiser.  His father was a miner and the family farmed. As a miner, Orbin reported a 1939 income of $728.

Ernest entered army service in April 1941.  It is very possible that he was assigned to K Company 116th Infantry very soon after completing his initial training and trained with the Regiment at Camp Blanding, Florida and shipped to England with the unit as well.  However, before he left for England he married Goldie Gertrude Addington on 21 Aug 1942.  The couple would not have had even 2 weeks together before the regiment boarded the ship for England in September.  In any case, he was in England with K Company and trained with that unit for the amphibious assault that was planned for the French coast.  He was killed in action in that effort on 6 Jun 1944.

PFC Kiser was repatriated in 1947 and is buried in the Adkins Cemetery in Wise County, Virginia. Goldie would not remarry until 1952.