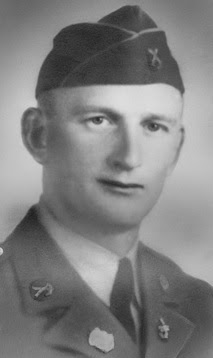 PFC Nick Napoleon Gillaspie was born 28 Mar 1918 in Bedford County, Virginia to Charles Claytor and Ella Berta (Howell) Gillaspie.  By the end of the year his father would be dead.  His mother remarried and he was raised by his step-father Christopher Warren Mayhew.  Nick had 6 siblings as well as step-brothers and sisters.  Nick worked on his step-father's farm.  Nick never married.

Both he and his younger brother Charles Claytor Gillaspie (named after the father who died before he was born) were in the Virginia National Guard when the units were federalized in February 1941.  Nick was with A Company 116th Infantry on D-Day when he was killed.  He now rests forever in the Normandy American Cemetery.
Posted by Hobie at 6:09 AM

Email ThisBlogThis!Share to TwitterShare to FacebookShare to Pinterest
Labels: A Company, BedfordBoys, NormandyAmericanCemetery