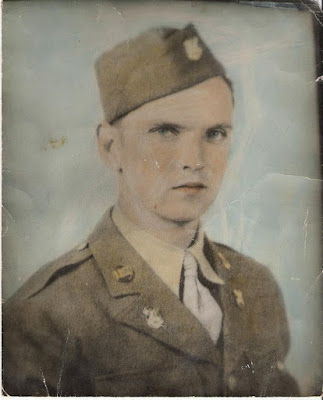 PVT James Alfred Mullen was born in 1919 in Worcester, Massachusetts. He was the oldest of 3 children born to Alfred J. and Eleanor M. (Noonan) Mullen. His father worked as a street car operator but died in 1937. This placed the family in dire straits and Eleanor went to work as an examiner (quality control inspector) in a stocking mill reporting a 1939 income of $180 while James was driving a truck for a quarry. But he only reported a 1939 income of $15. His brother was also working and reported a 1939 income of $120. That would have been $315 for the entire family that paid $192 for a year's rent of their apartment at 219 Main Street in Leicester, Massachusetts. However, James had managed to complete high school.

James was drafted in February 1942. After completing his training as a medic he was sent to England and assigned to Medical Detachment 116th Infantry and was then attached to A Company 116th Infantry for the amphibious landings that were to take place on 6 Jun 1944. PVT Mullen was killed in action on that day.

PVT Mullen was repatriated and re-interred in Saint Joseph's Cemetery in Leicester, Massachusetts where he will rest forever with his family.
Posted by Hobie at 5:48 AM

Email ThisBlogThis!Share to TwitterShare to FacebookShare to Pinterest
Labels: A Company, MedicalDet