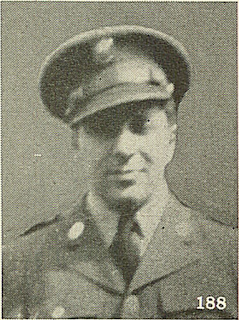 PVT Ralph L. Markowitz was born 16 Jul 1915 in Braddock, Pennsylvania. He was the 2nd of 5 children and oldest son born to Abraham S. and Isabelle (Jacobowitz). His father was a pharmacist. His mother died in 1929 of pneumonia and the family essentially broke up. Ralph went to live with his maternal grandparents on Holland Avenue in Braddock. Ralph dropped out of high school and went to work with family as a clerk in a drug store then for an ice cream company and Homestead Mill.

Ralph volunteered for the Army on 20 Feb 1942. After training we feel it was likely that he was assigned to A Company 116th Infantry before it shipped out for England in September 1942.He was certainly overseas before his maternal grandmother died in January 1943. He trained with A Company for the planned amphibious assault on Hitler's "fortress Europe".  The attack took place on 6 June 1944 and he was killed in action with many other in his company on that day.

PVT Markowitz was repatriated in 1948 and re-interred in Arlington National Cemetery in Arlington, Virginia.

Another page in honor of PVT Markowitz. We would like to thank Tammy Hepps of Homestead Hebrews for finding this photo of Ralph and allowing us to share it with you.
Posted by Hobie at 7:09 AM

Email ThisBlogThis!Share to TwitterShare to FacebookShare to Pinterest
Labels: A Company, ArlingtonNC