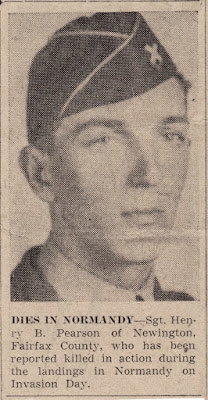 SGT Henry Benjamin Pearson Jr was born 25 Dec 1918 in Newington, Virginia. He was the soldest of 4 children of Henry Benjamin and Anna Deborah (Uron) Pearson. His father had become postmaster of Newington after his paternal grandfather ended his service as postmaster in 1933 and he also ran a grocery. Young Henry worked in construction.

Henry was drafted in May 1941. He was soon assigned to A Company 116th Infantry and went to England with that unit aboard the Queen Mary in September 1942. Once in England, Henry trained with the unit for the planned invasion of occupied France. He must have demonstrated competence and leadership skills because in those 2 years he achieved the rank of SGT. SGT Pearson was killed in action on 6 Jun 1944 in the landing at Vierville-sur-mer, France.

SGT Pearson was repatriated in 1948 and re-interred in the Pohick Episcopal Church Cemetery in Lorton, Virginia where he will rest forever with his family.

Brother, Samuel Thompson Pearson, served in the U.S. Army during WW2.
Posted by Hobie at 6:14 AM