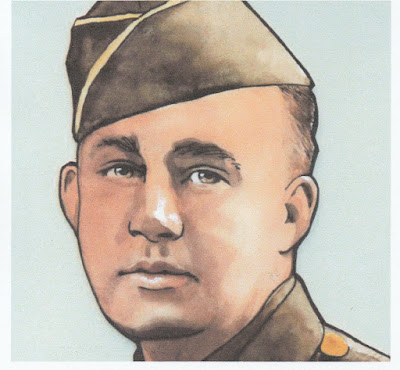 SGT Joseph Barr Churchill, b. 12 Sep 1912 - d. 7 Jun 1944. Son of John and Jane (Veasey) Churchill of Philadelphia, PA, John was assigned to B Company 116th Infantry. Wounded on 6 June, he died the next day. He was awarded the Silver Star, his citation reads as follows:

"Sgt. Joseph B. Churchill, 116th Inf, US Army, for gallantry in action against the enemy in Normandy, France. On 6 June 1944, Sgt. Churchill and his squad landed on the beaches of France under a withering barrage of enemy fire of all calibers. Despite seemingly insurmountable hardships, Sgt. Churchill led his men across the fire swept beach to positions on the high cliff overlooking the beach. At this point when the platoon was pinned down by enemy machine gun and sniper fire, he reached his destination and contacted friendly troops. While leading them forward, Sgt. Churchill was seriously wounded by enemy artillery fire. The outstanding leadership, courage, and unselfish devotion to duty displayed by Sergeant Churchill reflect great credit upon himself and the Military Service."

Email ThisBlogThis!Share to TwitterShare to FacebookShare to Pinterest
Labels: B Company, SilverStar