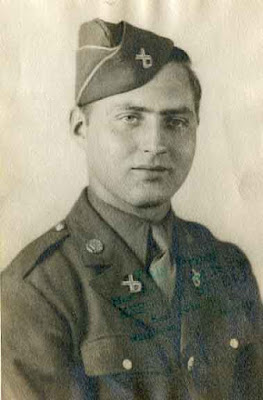 SSG Bernard Eugene Kirkendoll was born 15 Sep 1919 in Pennsylvania to Daniel Lafayette and Bessie Edna (Kocher) Kirkendoll.  His father was a barber in Danville, Pennsylvania for many years. In 1940, Bernard was working as a laborer and reported a 1939 income of $620.

Bernard was drafted in February 1942. After his initial training he was sent to England.  Bernard was assigned to and trained with Headquarters 1st Battalion 116th Infantry for the amphibious assault that was to take place on the French beaches in Normandy.  He was acting as chief radio operator for the battalion when killed in action in that effort on 6 Jun 1944.

SSG Kirkendoll was repatriated and is buried in the Odd Fellows Cemetery in Danville, Pennsylvania.
Posted by Hobie at 5:45 AM

Email ThisBlogThis!Share to TwitterShare to FacebookShare to Pinterest
Labels: HQCo1stBn