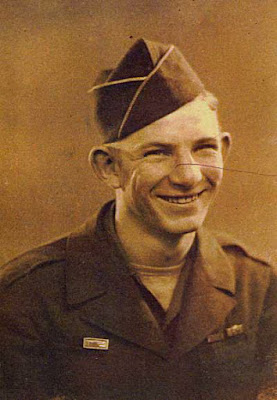 PFC Donald Albert Morton was born 3 Aug 1924 in Burlington Junction, Missouri.  His parents, John Willard and Crystal Belle (Bartlett) Morton had 8 other children 2 of whom died in infancy, Donald was their second. While his father served as Saddler during WWI, his younger brothers were too young to serve during WWII but his brother Robert served in Korea.

Donald entered service 5 May 1943 and was assigned to I Company 116th Infantry before D-Day or so it seems according to the morning reports as he isn't mentioned from 6 June until he was killed in action on 24 Apr 1945 near Grippel, Germany. He now rests forever in Ohio Cemetery, Burlington Junction, Missouri.
Posted by Hobie at 4:42 PM