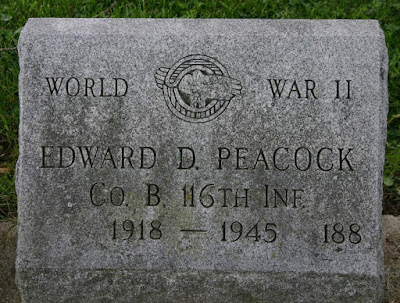 SGT Edward D. Peacock was born 9 Sep 1918 in Buffalo, New York. He was the 7th of the 10 children (5 boys and 5 girls) born to Frederick Wells and Dolly L. (Mensch) Peacock. His father was a railroad engineer but he died in 1922. It seems that the family struggled through the depression without Frederick's support. Consequently, all 4 of the 5 boys enlisted in the New York National Guard and served in D Company 174th Infantry. In 1940, Edward was working as a salesman at a department store but only reported a 1939 income of $90. The family of 6 adults as a whole had only brought in $1280 for that year.

Edward as well as his brothers was serving in D Company 174th Infantry when the unit was federalized in September 1940. The 174th was assigned to the 44t Division and sent to the west coast for a homeland defense mission. At some point Edward was sent to the European theater. On 11 Aug 1944 PVT Peacock was transferred from the replacement depot to B Company 116th Infantry. He was promoted to PFC on 20 Sep 1944. PFC Peacock was injured on 14 Oct 1944 and sent to hospital. He did not return to the unit, via the replacement depot, until 5 Dec 1944. He was promoted to SGT on 11 Mar 1945. SGT Peacock was wounded on 7 Apr 1945 and sent to hospital. SGT Peacock died of his wound(s) on 19 Apr 1945.

SGT Peacock was repatriated and re-interred in the Forest Lawn Cemetery in Buffalo, New York.

Edward's father served as a PVT in A Company 65th Infantry for a short time during the Spanish-American War. As previously mentioned, all his brothers had served with him in D Company 174th Infantry and all served during the war. The oldest brother, Frederick George Peacock, made the Army a career and rose to the rank of MAJ. Next oldest, Joseph Peacock, was the only brother who did not serve in the National Guard before the war and he was drafted in 1943 and served until 1945. Edward's younger brothers, William Robert Peacock and Raymond Warren Peacock, were both federalized with the unit in 1940 and seemed to have served the entire war with the 174th Infantry.
Posted by Hobie at 10:01 PM