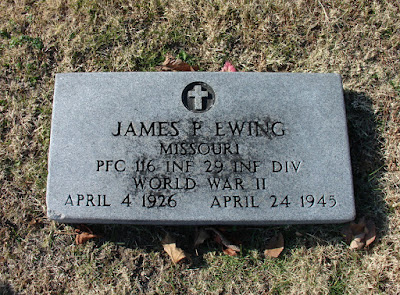 When James was drafted in August 1944 he had graduated from high school.  Completing his training he was sent overseas to replace soldiers who had been wounded or killed and was assigned to B Company 116th Infantry on 6 Mar 1945.  Wounded on 24 Apr 1945 and evacuated to hospital he died of wounds that same day.

PFC Ewing was returned to the U.S. in 1949 and is now buried in Newton Burial Park in Nevada, Missouri.