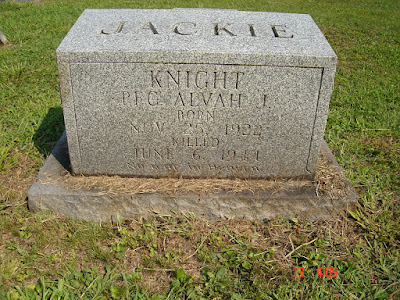 PFC Alva Jackson Knight was born 25 Nov 1922 in Sand Fork, West Virginia the second of three sons of Lloyd Byrle and Clarice Opal (Moore) Knight.  His father worked as a teamster and as a coal miner.

Alva had completed high school and was working as a farm hand when he was drafted in April 1943.  After his training he was sent to England and assigned to B Company 116th Infantry.  He trained with that unit for the amphibious assault that would begin the invasion of "fortress Europe".  PFC Knight was reported missing in action in that effort on 6 Jun 1944 but was later confirmed to have been killed in action on that date.

PFC Knight was repatriated and is now buried in the K of P Cemetery in Burnsville, West Virginia.