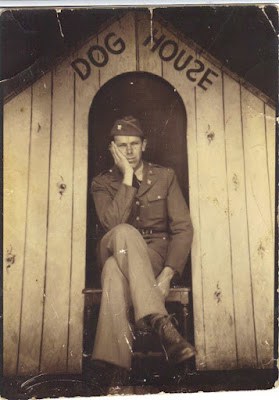 PFC Clarence Edward Peck was born 27 Feb 1918 in Cedar Bluff, Virginia. He was the 4th of 7 children born to John Michael and Eunice Myrtle (Thompson) Peck. His father farmed in the New Garden area of Russell County, Virginia on Kent Ridge along State Route 640. Clarence was reported as working at farming on the 1940 census, most likely for the Stuart Land and Cattle Company (which today controls 20,000 acres in Russell County).

Clarence was drafted in May 1941 and due to policies in effect at the time was assigned to D Company 116th Infantry at Fort Meade, Maryland. He then participated in all the training the company underwent at Fort Meade, Camp A.P. Hill, Virginia, in the Carolina maneuvers and at Camp Blanding, Florida. The unit boarded the Queen Mary and sailed for England in September 1942 and PVT Peck was with them. It was during their training for the amphibious landings planned for the invasion of occupied Europe that Clarence was promoted to PFC. PFC Peck was killed in action in the landings at Omaha Beach on 6 Jun 1944.

PFC Peck rests forever with many of his comrades from the 116th Regiment at the Normandy American Cemetery.
Posted by Hobie at 4:37 AM