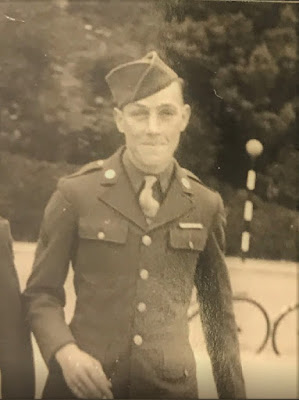 PFC Charles Robert Milliron was born 4 Feb 1919 in Roanoke, Virginia. He was the 2nd of 6 children born to George Dillard and Nettie May (Howell) Milliron. His father worked a variety of jobs and in 1940 Charles was working for the Works Projects Administration (W.P.A.) on road construction.

It is likely that Charles, like many other young men, had enlisted in his local National Guard unit for the $1 a day it paid for drilling every Tuesday night and for 2 weeks every summer. Charles was federalized in February 1941 with his unit, D Company 116th Infantry. He trained with the unit at Fort Meade, Maryland and Camp Blanding, Florida before shipping out for England in September 1942. Once in England he continued to train with the unit, now for the planned amphibious landing that would be part of the invasion of northern occupied France. That landing took place on 6 Jun 1944 and PFC Milliron was killed in action on that day.

Brother, Alfred Wiley Milliron, served in the U.S. Army. Great-grandfather, Alexander Blueford Milliron, was a PVT in the Bedford Light Artillery, and died of wounds in Richmond, VA in 1864.
Posted by Hobie at 4:28 AM