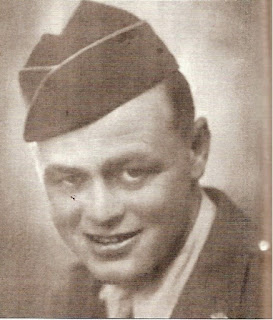 SSG Earl Lloyd Parker was born 22 Jan 1914 in Bedford County, Virginia. He was the 2nd of 5 children born to Joseph Ernest and Eula Grace (Arrington) Parker. The family farmed. Earl graduated from Bedford High School and went to work for Piedmont Label Company making labels for canned goods. He was said to enjoy hunting and baseball.

Earl joined the National Guard unit in Bedford, A Company 116th Infantry and was a PFC in the unit when it was federalized in February 1941. He then trained with the unit at Fort Meade, Maryland and Camp Blanding, Florida before sailing with the unit aboard the Queen Mary to England in September 1942. Before leaving he would marry Annie Viola Shrader on 26 Jan 1942. Once in England he trained with the unit for the planned amphibious invasion of occupied France. Operation Overlord's amphibious landing at Omaha Beach began the morning of 6 Jun 1944 and SSG Parker was killed in action on that day. 1LT Ray Nance told Annie that SSG Parker had been struck by a mortar shell and his body washed out to sea.

SSG Parker is memorialized on the Tablets of the Missing at the Normandy American Cemetery and there is a cenotaph in his memory in Oakwood Cemetery in Bedford, Virginia.

Earl was the only "Bedford Boy" who was a father. He and Viola had a daughter, Mary Daniel Parker, born to them on 16 Feb 1943. Earl had only seen photos of his daughter. Earl's younger brother, PVT Joseph Ernest Parker Jr, would be killed in action on 27 Aug 1944 while serving with C Company 116th Infantry. Their younger brother, William Eugene Parker, was captured and held as a prisoner of war at Stalag 7A Moosburg Bavaria 48-12 (Work Camps 3324-46 Krumbachstrasse 48011, Work Camp 3368 Munich 48-11).

Links:
- National D-Day Memorial
Posted by Hobie at 4:28 AM