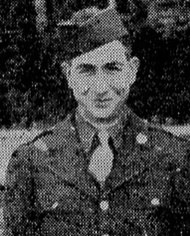 PVT George Robert Losey was born 7 Oct 1924 in Ogdensburg, New York teh fourth of eight children of Arnold Deforrest and Lena May (LaMay) Losey. His parents had moved to St. Lawrence County, New York from Ontario, Canada. The family farmed. George's mother died in 1932. On 19 Jan 1942 he married Margaret Ida McDonald in Ogdensburg. George worked as a farm hand.

George was drafted in May 1943. After completing basic training he was sent to England and assigned to C Company 116th Infantry.  Margaret enlisted in the Women's Army Corps in April 1944. He was with the unit for the amphibious invasion of occupied France and was killed in action on 6 Jun 1944.

PVT Losey was repatriated and re-interred in the the Ogdensburg Cemetery in Ogdensburg, New York.  Margaret re-married and was honorably discharged as a PFC. The couple had no children.