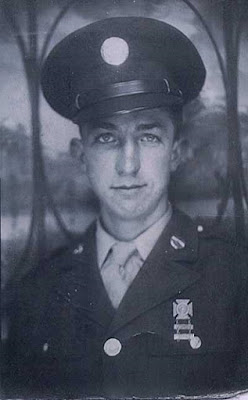 PVT Howard Ogden was born 19 Dec 1924 in Amherst County, Virginia to Hugh Oliver and Myra Jane (Ogden) Ogden.  His parents were 1st cousins.  Of their 8 children only Howard and his older brother, Rader Mathias Ogden (later Reverend) served during WWII. His father worked in a paper mill.  Howard's mother died in 1933 but his father did not remarry until 1944.  Howard never married.

Howard was drafted in July 1943 and actually entered service in Roanoke, Virginia.  He was sent overseas and assigned to F Company 116th Infantry prior to D-Day.  At first recorded as missing in action, his status was changed to killed in action on 6 Jun 1944.

In 1948 his body was repatriated and he now rests forever in Green Hill Cemetery in Rockbridge County, Virginia.
Posted by Hobie at 4:29 AM