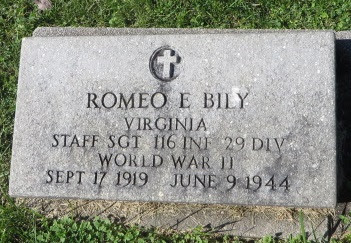 SSG Romeo Edward Bily was born 16 Sep 1919 in Amelia County, Virginia to Andrew Vernie and Anna May (West) Bily.  The family farmed and his father worked as an electrical contractor and grocer.  In 1940, Romeo was a unpaid family worker working as a clerk in the grocery store.

Drafted in May 1941, Romeo was eventually assigned to D Company 116th Infantry prior to the amphibious assault on "fortress Europe" on 6 Jun 1944.  He participated in that landing and in the combat that followed until he was killed in action on 9 Jun 1944 when he was shot by a sniper outside Couvains.

Repatriated in 1948, SSG Bily is buried in Amelia Cemetery in Amelia Court House, Virginia.
Posted by Hobie at 8:24 PM