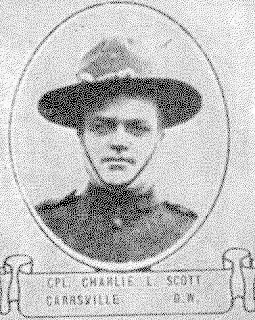 CPL Charles Luther Scott was born 5 Aug 1895 in Isle of Wight County, Virginia (most likely in Windsor) one of twelve children of James Urquhart and Susan (Corbitt) Scott. The family farmed.

After entering the Army, Charles was assigned to E Company 116th Infantry.  He was with the unit when it was deployed to France aboard the ship Finland on 15 Jun 1918.  His parents may have died before this because his youngest sister, Susan Jemima Scott, was listed as his next of kin on the manifest. Shown as a PFC in the after action report by LTC Hierome Opie, there are repeated notes that he had been promoted to CPL.  CPL Scott died of wounds received earlier on 25 Oct 1918.

CPL Scott was repatriated and re-interred in the Beaver Dam Baptist Church Cemetery in Carrsville, Virginia.