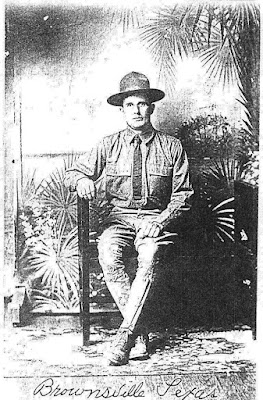 Clifton enlisted as a PVT in F Company 2nd Virginia Volunteer Infantry on 8 Jul 1915 and had served continuously since that time. When the National Guard units were mobilized for service and combined to form the 116th Infantry Regiment, he was assigned to F Company 116th Infantry.  When the unit embarked aboard the Finland for the voyage to France, he was already the Acting Supply SGT for the unit.  He remained in that position until killed in action on 16 Oct 1918.  The following account was published in a local newspaper:

FIGHTS DESPITE WOUND: According to Sergeant Glenn, of Company F, recently returned from France, Clifton O. Burks, who worked in Roanoke, but whose parents reside in Glasgow, was killed in the Argonne Forest, October 16, when, had he so chosen, he could have been far in the rear of his command in a hospital. On October 9, Private Burks sustained an injury to his back and was marked up by the Army surgeon for the hospital, but he refused to leave his company and go back. Though suffering intensely at times, he kept his position in the ranks, and at 8 o'clock on the morning of October 16, was shot down right beside Sergeant Glenn, sustaining a broken right leg and a severe cut about the face. Ten minutes later he was instantly killed by a bursting shrapnel shell, a fragment of which passed entirely through his body. His remains were buried by his comrades in the 29th Division burial ground in the Argonne Forest, just beside the Verdun-Sedan road, and a cross erected to his memory.

Grandfather Charles Clifton Burks was wounded in the right side while serving as a Lieutenant with H Company 4th Virginia Infantry during the Civil War.
Posted by Hobie at 8:29 PM