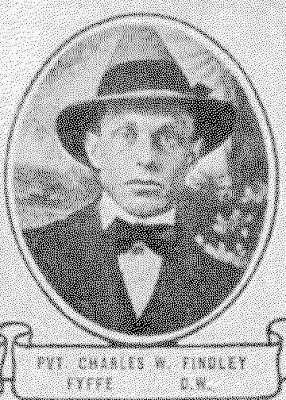 PFC Charles William Findley was born 9 Oct 1892 in Etowah County, Alabama the 2nd of 8 children born to John Pinckney and Nacoochee Marie (Parr) Findley.  His father worked as a blacksmith in Etowah County and then the family moved to Dekalb County, Alabama and began farming by 1910. In 1917, Charles was working for W. B. Jones (who operated cotton mills) in Crossville, AL as a bookkeeper.

After he entered the service, Charles was assigned to I Company 116th Infantry and trained with the unit at Camp McClellan, Alabama.  On 15 Jun 1918, he sailed for France aboard the USS Finland, still with his unit.  PFC Findley was wounded and died of those wounds on 18 Oct 1918.

Repatriated in 1921, PFC Findley was re-interred in Arlington National Cemetery in Arlington, Virginia.
Posted by Hobie at 5:12 PM

Email ThisBlogThis!Share to TwitterShare to FacebookShare to Pinterest
Labels: ArlingtonNC, I Company